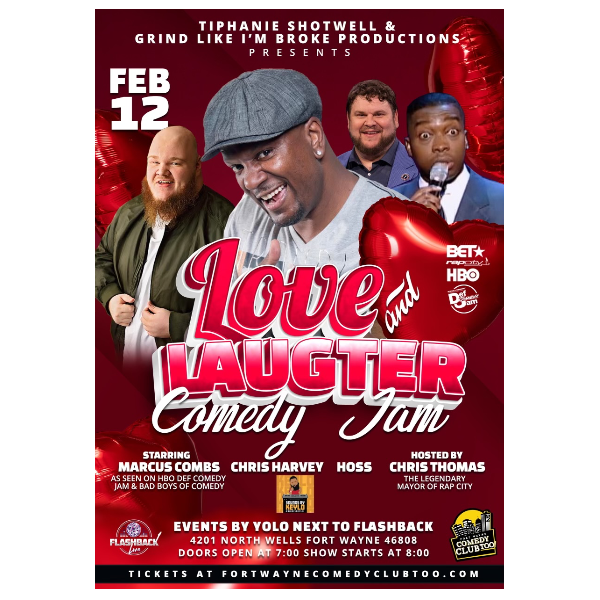 There is a two (2) purchase beverage minimum per guest.

All Shows 21 and older

All Sales Are Final - No Refunds

Video recording of events and flash photography not allowed. Cell phone use not allowed in showroom. Card subject to change.

Headlined by The Hilarious Marcus Combs ( HBO Def comedy Jam , Showtimes Bad Boy’s of comedy ) , & Hosted by The legendary Mayor of Rap City Chris Thomas ( BET,Comic View, Def Jam, HBO), With Special Guest Chris Harvey and Hoss! This is one you don’t want to miss, A comedy show for the mature crowd ! A great way to spend Valentines Weekend💝

Chris Harvey is a stand up comedian, actor and writer out of Akron, Ohio. At the young age of 25 Chris is a regular at many clubs such as Cleveland Improv, Toledo Liberty and Dayton Funnybones and many more. He’s opened for many National acts such as The late John Witherspoon, Tk Kirkland, Karlous Miller, Chico Bean and many more. He has won 2014 Ohio’s best Amateur and 2016 Toledo’s best urban comic, been nominated for OEA 2018 Best comic and Nominated for 2019 Cleveland’s road Warrior. He’s been seen on Amazon Prime as “Snuffalouphogus” in the movie Hey Mr Postman starring Omar Gooding and Paula Jay Parker. And will be seen on Starz in 2020 as “White Boy Bobby” in the new movie Rent Due Starring Ray Jr, B Simone, MGK, Michael Coyler and HaHa Davis.

Born and raised in Chicago, Illinois, Marcus has always loved to clown around; especially in school. His father named him the Class Clown. Marcus was also a great athlete even though class wasnt always high on his priority list. He played football, baseball, wrestled, and ran track. After high school he received a football scholarship at the University of Langston in Oklahoma to pursue his football career and majored in physical therapy. Marcus got his first stand up comedy opportunity in college. The hit HBO Def Comedy Jam performed a show at his school as a homecoming event. Adele Givens was the host, with DJ Kid Capri and others. Adel took the stage and ask, Is there anyone here who thinks they are funny and wants to be on Def Comedy Jam now is the time to come forward. His heart jumped and all the football players told him, go head, get up there. Marcus was only seventeen years old and even though he was scared at the time, he was no rookie to the stage. Marcus was a break dancer since he was 5 years old and performed at huge events like the Swatch Watch Fresh Fest, in Chicago. So he walked on the stage, nervous and laughing, because it was the first time he had ever had a drink in his life. He improved a five minute set, where he talked about the players on the team. The audience loved it and Adel told him, If you dont graduate you damn sure could be a comedian. Marcus returned home from school for Christmas break to celebrate the holiday with his family. Shortly after tragedy happens. While riding with one of his friends in the backseat of a car, a car involved in a high speed police chase crashed right where Marcus was sitting; its a good thing he was not wearing a seat belt or else he would have died. He was hospitalized for three months, he lost his football scholarship. He laid there wondering what he was going to do with his life. Then he heard a radio commercial promoting an open mic at All Jokes Aside, a comedy club in Chicago at the time. After he healed from his accident, he went to the comedy club and thats when his comedy career began.


Comedy came easy for Chris Thomas, at age 8 he learned he had a knack for Impersonating just about anybody, till the day he was 19 and the Washington Star dubbed the young stand-up comedian as an “impressionist headed no place but up.” So began Chris’s professional career. However, his swift and steady rise since then is the result of much hard work which has allowed Chris to become one of the nation’s brightest comedians, in the words of the Washington Post magazine “an accomplished impressionist…on his way to fame and fortune.”

Chris Thomas is the master of over 2000 amazing realistic celebrity impressions, including Denzel Washington, F. Lee Bailey, Mike Tyson, and Orson Welles. One of Chris’s favorite subjects, Sugar Ray Leonard, says quite simply “Chris Thomas knocks me out!” The Charlotte Observer lauded his ability to “move like a comic juggernaut from one famous voice to another.” Chris combines this versatility with a quick wit and deft timing to create remarkably funny conversations between several personalities at once. Chris has added impressions of singers including Frank Sinatra and Jeffrey Osborne, plus outrageous rap numbers to his repertoire to create his own fresh brand of humor.

Audiences have been knocked out by Chris’ stand-up performances at major venues including New York’s Catch A Rising Star and The Comedy Store in Los Angeles. He has performed with an array of artists including Stevie Wonder, Aretha Franklin, Prince, Luther Vandross and Anita Barker. Chris continues his extensive live performance schedule both on his own as well as with fellow comedians, Jamie Foxx and Mark Curry.

Success as a stand-up comedian has allowed Chris to expand his work into all major media’s. His radio work includes weekly appearances on WRKX New York’s morning show and the nationally syndicated Chris Thomas Comedy Hour. Advertising work has included such clients as Levis, Xerox, and Lee Jeans. Chris has been featured in film and video work including “Body and Soul” and Public Enemy’s “Fight The Power” while television appearances include “Star Search,” “Live At The Apollo,” and “The Sugar Ray Leonard Roast.” Chris’ work on the 1988 Run/DMC and Public Enemy national tours established him as the King of Hip Hop comedy and led to his most popular role as The Mayor of Black Entertainment Televisions’ (BET’s) “Rap City”; the cable network’s highest rated show.

Perhaps his biggest break to date, however, has been the opportunity to team up with the renowned Whoopie Goldberg for an HBO comedy special. Whoopie happened to see a tape of Chris’’ stand-up act, and wanted to give him a wider showcase on the cable channel known for its outstanding comedy programming. As a result, Thomas was one of two featured comedians on Whoopie’s “Chez Whoopie” on HBO.

As his audience continues to grow, more and more fans find they converted to Chris’ unique comedy. Meanwhile, he continues to find new ways to keep his fans laughing and coming back for more.

Hoss Ridgeway has been entertaining groups of all sizes since the 1990s. He has performed in over 30 states and a few countries. He has made audiences laugh in clubs, on cruises, in churches and for large corporations. He uses stand-up comedy, impressions, crazy sound effects and musical comedy to bring his unique style of comedy to crowds all over the USA. He has recorded a DryBar special and is a regular at the Mike Huckabee show.

There is a two (2) purchase beverage minimum per guest.

All Shows 21 and older

All Sales Are Final - No Refunds

Video recording of events and flash photography not allowed. Cell phone use not allowed in showroom. Card subject to change.

Headlined by The Hilarious Marcus Combs ( HBO Def comedy Jam , Showtimes Bad Boy’s of comedy ) , & Hosted by The legendary Mayor of Rap City Chris Thomas ( BET,Comic View, Def Jam, HBO), With Special Guest Chris Harvey and Hoss! This is one you don’t want to miss, A comedy show for the mature crowd ! A great way to spend Valentines Weekend💝